It is not for nothing that, Elder Godsday Orubebe’s resignation from the Peoples Democratic Party (PDP) is trending.

After working for the party for years, the former Minister is irked that, the party has failed to do the right thing at the right moment and said he had to leave due to the failure of the PDP to zone the Presidency to the Southern part of the country.

His action has generated interest on the political stratosphere because it is an indictment on the PDP for failing to uphold the time tested principles of equity and justice.

This is unlike the All Progressives Congress (APC), which got it right, as far as, equity and fairness to all is concerned.

This is why, the emergence of Asiwaju Bola Ahmed Tinubu, a Southerner has held the interest of genuine statesmen in Nigeria together, as the APC has demonstrated its capacity to make sacrifices for the well being of the nation (Nigeria).

Being a Muslim has however thrown up another challenge to the APC and this has to do with the choice of a running mate for Tinubu and the need for religious balancing to give all a sense of belonging.

Proponents of Muslim/Muslim ticket, have dominated public discourse with the point that the Muslim North should be factored in since it holds the Vote-Bank.

But, those that toe this line of argument have not followed the dynamics of Nigeria’s political history to wit that, those standing elections are not only those on the ballot, but those behind them as well or put in another way, a political figure can be on the ballot without being the candidate of a party.

For instance, when President Muhammadu Buhari emerged as the Presidential candidate of the then opposition party (APC), he did not accept having a Muslim running mate, but agreed upon and accepted Tinubu’s nomination of Pastor Yemi Osinbajo, a Christian Southerner, to create a balance and avoid the inherent dangers that would go with a Muslim-Muslim ticket.

Although Sen Tinubu was not on the ballot paper and ticket in 2015, he delivered the South West to the APC as if he was the one standing for the election.

Similarly, President Buhari is not on the ticket for 2023, but his bankable 12 million votes, which comes mainly from the Muslim North are bound to follow his direction and that of his party like Tinubu was able to influence for the APC in 2015.

It is instructive to note that, in spite of his gargantuan followership, Buhari insisted on a Muslim/Christian ticket before winning the 2015 and 2019 elections.

Now that Tinubu is also faced with a similar situation, he is expected to ride on the doctrine of reciprocity and allow President Buhari to also present a Christian Vice Presidential (VP) candidate to him for APC to win the Presidential election come 2023. 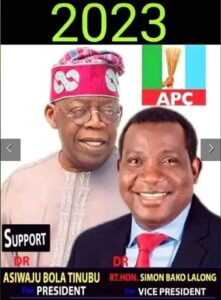 Buhari’s support will hopefully bring the usual northern votes, just like Tinubu’s support for Osinbajo brought votes from the Southwest.

This being the case among the Christian aspirants been analyzed so far as running mate to Tinubu, the nominee that holds the Aces still remains, Rt. Honourable Simon Lalong, the Executive Governor of Plateau State and the Chairman of the Northern Governors Forum (NGF).

As the only Christian APC Governor from the North, he has exhibited leadership as the first among equals.

The support he has enjoyed from the Northern Governors Forum (NGF) and his track record for promoting peaceful coexistence has also further distinguished him.

The Facts remain that, a Tinubu/Lalong ticket, will certainly bring regional and religious balance and ensure equity and justice in the country.

While his Chairmanship of the Northern Governors and Progressives Governors will attract the support of the Governors, his candidature will attract Christian votes from the northern and southern parts of Nigeria.

A Tinubu/Lalong ticket will stall the exodus to the Peter Obi/Labour Party frenzy, which is gaining traction.

Buhari demonstrated those virtues when he insisted on Muslim/Christian ticket in 2015.

Tinubu must demonstrate statesmanship by allowing a Muslim/Christian ticket in 2023.

This takes after the pattern in our recent history as a nation where Obasanjo paired with Atiku, Yaradua with Jonathan, President Jonathan with Sambo and now Buhari with Osinbajo, which took care of the regional and religious balancing.

With the support of President Muhammadu Buhari, Lalong will replicate the winning formula that Asiwaju brought to Vice President Yemi Osinbajo in 2015, with the additional value of equity, justice and fairness.

As a Catholic and a Knight of Saint Gregory the Great (KSGG) bestowed on him by the Pope, there is the possibility that, pairing with Lalong will resonate with the predominantly Catholic South East and probably make the ticket become more appealing to the likes of Orubebe, who are demanding for fairness in the poor PDP game of choice.