The ruling All Progressives Congress (APC) in Plateau State has congratulated all the APC elected Chairmen and their Councilors in the 17 Local Government Areas (LGAs) of the state, for their first 100 days in office.

The APC Chairman said, the attainment of this height thus far is a significant landmark in the party’s march towards greatness.

The Chairman, Hon. Rufus Bature, in a press release dated 19th January, 2022, signed by, Hon. Sylvanus Namang, the APC State Publicity Secretary, charged the Chairmen and Councilors to “work in unison towards replicating and consolidation on the gains of Governor Simon Bako Lalong Rescue Administration in their various local government areas.”

He further advised the Chairmen under the auspices of ALGON on the need for peer review where they should work in synergy towards achieving common goals for the good of the citizenry.

He said, “The APC encourages the provision of dividends of democracy on a competitive basis amongst the local governments, as the people at the grassroots need to feel the impact of governance at all level”.

According to the release, Hon. Rufus Bature, expressed satisfaction with the performance of the elected local government Chairmen so far, especially the relative peace and stability that is being witnessed in the state, while calling on the electorate to be patient and allow them to work for the collective interest of the people of their domains instead of soliciting for patronage and personal gains.

However, in a swift sweep on the person of John Akans, the Publicity Secretary of the Peoples Democratic Party (PDP) the major opposition political party in the state, the APC wonders why John Akans, hates the APC so much and why he continues to off load extreme dislikes ignorantly, on issues he cannot substantiate.

In a press statement dated 19th January, 2022, and also signed by Hon. Namang, the APC advised John Akans, the Spokesman of the PDP, to wake up from his slumber and stop lying to the good people of Plateau State concerning activities of the ruling party, which he can hardly substantiate. 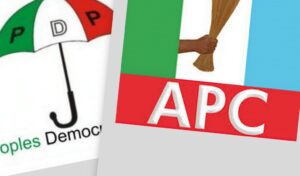 “John Akans, to all those, who know his antecedents, is a disreputed rabid and an unrepentant character assassin, who lacks respect for people with any worth.

“Through his conduct, discerning minds would agree with us that, he is too immature and feeble minded to be entrusted with the responsibility of an image maker of any serious party.

“As a result of his behaviour, he could rather be passed for an undertaker, who once settled, would do anything as directed.

“The PDP by now ought to know that, Akans, who behaves like a bull in a China shop, constitutes a great embarrassment to it as a party, which once governed this state.

“He is mad with the APC in the state, as he expects it to remain silent over his barren and unsubstantiated vituperations, which we have always considered and rightly so, as obvious distraction.

“The APC has said it and let’s state it for the umpteenth time that, we need a true and vibrant opposition and not peddlers of falsehood and rumours.

“He should back his allegations about Governor Lalong and the chartered flights. Why is that what he alleged to have taken place between 2015 and 2017, being brought out as, fresh facts in 2022?

“The APC is challenging him to substantiate the claims, which he clearly knows are false. Chartered flights, twice a day and five times a week to Abuja and he wants this obvious lie to be believed, more so by the very intelligent Plateau people?

“He did not stop there. According to the PDP image maker, who we see as a misfit, “this has resulted in the non-payment of workers’ salaries and pension. Is it the same workers, who on their own volition named the Governor as, “Governor Alert” or which workers?

“Certainly, it cannot be the same workers, who had their Nine months backlog of salaries left unpaid by his principal, who owns his own faction of the PDP, but which was cleared, by the same Governor he is referring to.

“John Akans, also claimed that, Governor Lalong has left Plateau State with a debt profile of #122b and $96m as at December 2017.

“We again, challenge Akans, to provide the source of this statistics, if it’s not fabricated in their aforesaid factory.

“Debt stocks and other financial transactions by states are in the public domain. Except the lazy PDP, if not for its mischief, in this 21st century, these can easily be found out from the National Bureau of Statistics, which publishes monthly or quarterly reports on states’ financial standings.

“Where did Akans place the verified debt of over N200b left behind by the Jonah Jang’s administration in this debt charade?

“If from N200b debt left behind in 2015 by former Governor Jonah Jang and Governor Lalong was able to reduce it to N122b in two years by 2017, does he not deserve to be praised by the PDP?

“Haba John Akans, Wake up from your slumber!

John Akans in his day dreaming claimed that the APC in the Plateau State is traumatized by what he terms as, flurry of defection from the APC to the PDP.

“Let him inform the public of the number of defectors the PDP has so far received in spite of the media hype about such defection.

“The APC unlike the PDP in Plateau state is a democratic party with well set dispute resolution mechanism which it remains focused and undeterred in its pursuit.

“The factional dummy, by the PDP to some aggrieved APC members was peacefully resolved to the chagrin of the PDP.

“Let’s assure the PDP in Plateau state that our members would not defect to the PDP as doing so would amount to committing a political suicide. Our members would not leave their home to go into the rented house of the PDP which has a very intolerant, dictatorial and overbearing landlord.

“We have proved ourselves very capable of putting our house in order. The attempt to divide the ranks of the APC in the state is an attempt in futility.”