The Director General of Plateau State Peace Building Agency (PPBA), Mr. Joseph Lengmang has dedicated the Independent Publishers Association’s Award of Meritorious Service by the Agency to the Executive Governor of Plateau State, Rt. Hon. Simon Bako Lalong and the Staff of the Agency.

You would recall that, REALITY had reported that, Plateau State Peace Building Agency (PPBA) had scored high performance in the ongoing assessments of Corporate, Non-corporate Institutions, Agencies, Elected/ Non-elected and Appointed individuals from and in Plateau State.

REALITY also reported that, the assessment and scores of PPBA, from all indication is based on the Agency’s performance towards maintaining the peace, unity and development of the state in the past two years.

The D-G, Mr. Joseph Lengmang in his remarks, while happily receiving the Award from the Chairman of IPA today (18th of January, 2022) in his office said that, though there are isolated pockets of attacks and arson been reported in the state, all thanks must go to the state Governor for his vision in establishing the Peace Building Agency.

He said the Agency is one of the enduring legacies that Governor Simon Lalong is going to leave behind, whether people like it or not.

Adding that, “This is a deliberate policy of the incumbent administration, which has helped to reduce the level of violence in the state. we are proud of it and proud of the Governor.

“We are inspired and encouraged with this Award! We shall continue to do our job. We must not allow trouble makers have their way because, we cannot surrender our values and norms.

“We must continue to promote peace in the state and we hope the members of IPA will join us too in the crusade.

“The Agency is not about me, but includes the young faces you are seeing today in the office and this Award is dedicated to them.

“The bashing we receive on daily bases is not as important as, the peace we need. So, we must negotiate it to change the mindset of the people.

“We are building an institution that will live after us. So, it calls for re-dedication and re-commitment!”

Earlier, while presenting the Award to the D-G, the Chairman of IPA, Mr. Shabul Mazadu, commended the State Governor, Rt. Hon. Simon Lalong and his Rescue Mission’s efforts for giving rise to the establishment of the Agency

He said, “Suffice me to commend the Apostle of the Rescue Mission and Plateau State Governor, Rt. Hon. Simon Lalong, whose ingenuity gave rise to the Peace Building Agency, which was first of its kind in Nigeria with the sole aim of restoring, enhancing and consolidating peace on the Plateau. 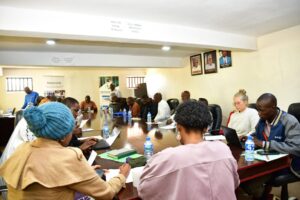 “The initiative for the establishment of PPBA is noble, commendable and remarkable, as peace is the nucleus and fulcrum of unity, progress and prosperity in the society.

“It is worthy of note that, the Almighty delights in peace and loves it too, that’s why Apostle Paul said, “Follow peace with all men” Hebrews 12:14. Jesus Christ said, “Blessed are the peacemakers for they shall be called the children of God.” Matthew 5:9

Adding that, “IPA is here today to confer an Award of Meritorious Service on your Agency (PPBA), in peace building in our dear and amiable state.

“PPBA is doing remarkably well in discharging its duty and we deemed it fit to confer you with a Meritorious Award of sterling performance.

“I commend the resilience of all Management and Staff of the Agency over the bashings and tongue-lashings you receive too often on social media, as if, you are bestowed with the power and control over law enforcement agencies and territorial integrity protectors.

“You have not given in to the cunning craftiness via casting aspersions to disquiet and dampen your spirit by profiteers of crises. Your determination for the termination of mutual suspicion and other ingredients of the broth of perpetual crises in the state, has projected you as great Plateau patriots.

You should have at the back of your mind that, you might not get the encouragement commensurate to your labour, as political profiteers of crises and gun runners see you as enemies and will stop at nothing to cajole and recruit the ignorant into discrediting your efforts and agency to achieve their nefarious activities.

“I will suggest that your duty should not rest on the oars of advocacy only but deployment of activities that will bring communities together such as sports, to keep the youth engaged because an idle mind can be the devil’s workshop of fomenting crises.

“Also, the Agency should put its head with the main body of Government to enact laws to regulate preaching of ethnic and religious animosity by so many clergies in the state. Such sermons of hate are triggers to insecurity at the slightest provocation.

“The Government must not sleep over preachers of ethnic and religious animosity as they have been a serious clog in the wheel of the restoration of peace in the state, and threat to peaceful coexistence, and by extension saboteurs to progress and prosperity.  Animosity breeds mutual suspicion and mutual suspicion encourages attack as means of defence.

“Therefore the government should endeavour to enact laws as it did to kidnapping and land grabbing to regulate provocative sermons.

“Finally, I am calling on all lovers of peace and the government to rally round PPBA and support it by whatever legitimate means to simplify its job in peace advocacy and building.”