Plateau State Ministry of Lands, Survey and Town Planning has taken the issue(s) of land registration in the state very serious, as it embarks on campaign to create awareness in the state among corporate and non-corporate organizations and also to distribute Demand Notices for payment of arrears of ground rents among others.

The campaign is also aimed at correcting the current observed violations of various land laws in the state, spilling over decades by the Ministry.

You would recall that, the Ministry of Lands, survey and town Planning Plateau State, had observed that, property owners are either in contravention or violation of their Certificate/Right of Occupancy of the Land use Act, Land Tenure Law of Northern Nigeria and Section 3 of the Plateau State Land Use Charge Law. 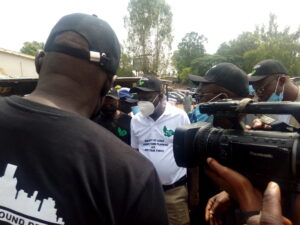 The Task Force constituted by the Ministry led by its Commissioner, Mr. Yakubu Dati, as Chairman, visited corporate and non-corporate organizations on 26th, October, 2021, to serve Demand Notices on them in the state capital.

The Task force while on the campaign, visited the popular motor park opposite the Nigerian Television Authority (NTA) and discovered that the land was initially granted for a residential property development, but instead, it is being used as a motor park, which is generating millions annually for the owner, while the same owner has failed to remit what is due for Government.

A Demand Notice for the owner to appear at the Ministry to regularize the document concerning the property was issued and received on behalf of the owner by a man, doing business in the name of Malgam Transport.

The Task Force also took its campaign to the Plateau state Central Mosque where it met with the leadership of JNI.

The Commissioner, Mr. Yakubu Dati, and the Deputy Director Lands, Mr. Adamu Haruna, took turns to educate the members of JNI of the importance of land registration and the value chain attached to the title for the land owner.

They also warned that the Ummah should not take any imposter agent serious as the Ministry deals directly with land owners since the process is computerized.

The Hon. Commissioner, Mr. Dati, further disclosed that, “to encourage property owners to register their lands, the administration of Simon Bako Lalong has slashed the statutory fees for registration by 50%.

After listening to the duo, the Secretary of JNI, Alhaji Salim Salihu, urged the Task Force to embark more on the awareness campaign in order to enable villagers understand the need to come forward for the exercise.

The members of JNI unanimously thank and praised Governor Lalong for the feat he has achieved so far in his administration.