Governor Simon Bako Lalong of Plateau State has visited the residence of the Deputy Speaker, Idris Wase, in Jos to commiserate with him over the death of his elder sister, Hajiya Maryam Idris Abdullahi Maikano who died recently. 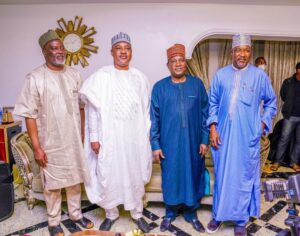 Avvording to a Plateau State Government Press Statement, signed by Dr. Makut Simon Macham, the Director of Press and Public Affairs to the Governor, dated, 26th July 2021, Lalong described late Hajiya Maryam, wife of the late Emir of Wase Alhaji Abdullahi Maikano as a virtous woman, who demonstrated exceptional humility, generosity, kindness and honesty during her lifetime and lived an exemplary lifestyle.

Governor Lalong accompanied by the Secretary to the Government of the State, Prof. Danladi Abok Atu, Chief of Staff Noel Donjur, Head of Service, Engr. Sunday Hyat as well as  Commissioners of Transport, Information and Communication, and Special Duties.

While urging the Deputy Speaker and members of the family to accept her death as the will of God, Governor Lalong said her legacies will remain a point of reference in a very long time.

Deputy Speaker, Rt. Hon. Idris Wase, thanked the Governor for his words of comfort, support and personal visit which affirms his humility, compassion and kindness.

Elder brother to the Deputy Speaker, Retired Justice Yakubu Idris, also welcomed the visit of the Governor, describing it as another gesture that has characterized inclusivity and non discrimination of the Lalong administration.

He urged the Governor to remain firm in his passion for peace and security, which is the basic requirement for development. He said the efforts of Governor Lalong have yielded good results, making Plateau one of the relatively safe states in the country.