Governor Simon Bako Lalong of Plateau State has expressed appreciation to the Nigerian Immigration Service, Plateau State Command, for their support and collaboration, towards addressing security issues of the State.

According to a Plateau State Press Statement signed by Dr. Makut Simon Macham, the Director of Press and Public Affairs to the Governor, dated, 6th May 2021, Governor Lalong expressed this position, when the State Immigration Comptroller, K.N. Nandap, led members of her management team on a courtesy visit to him at the Government House, Rayfield Jos.

“Lalong said the Plateau State Command of the Immigration Service for their active commitment in security operations they have assisted in returning peace to the State”. The statement stated.

Adding that, “He assured the State Comptroller that, his administration will continue to perform its role of supporting security agencies to succeed by assisting them with equipment and other logistics to carry out their functions”. 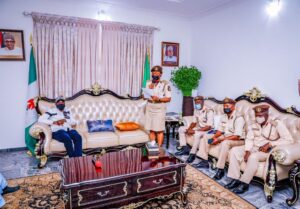 Earlier, the State Comptroller, K.N. Nandap, told the Governor that, the Immigration service personnel have enjoyed their tour of duty in Plateau State because of the support of the State Government under his leadership.

She said the service has continued to carry out its duties of securing Nigerian borders and tracking immigrants, as well as, carrying out other duties. 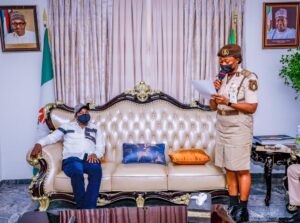 She asked for, “the support of the government in other areas such as, provision of more patrol vehicles and logistics among other equipment”.