As part of its efforts to reduce the effect of global warming and climate change, Global Warming Shield Foundation (GWSF), Plateau State chapter, is determine to continue its project of tree planting campaign, which is expected to kick start tomorrow in commemoration with the celebration of Nigeria’s 60th Independence Day.

REALITY gathered that, arrangements are on top gear by GWSF, to commence the tree planting campaign alongside donating to enhance the campaign.

It is expected that these donations would be made by interested members, who have seedlings to give out during the exercise tomorrow. 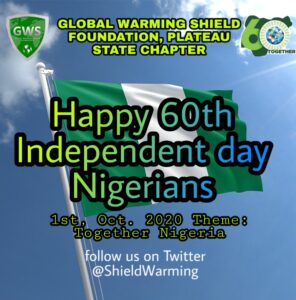 From reliable information gathered by REALITY, the Foundation has its State coordinator, as Mr. Okechalu, a senior lecturer at the Federal College of Forestry, Jos, Plateau State, with other top members, who are also lectures, like Mr. Chris and students from different Universities.

As part of the grouping of membership, Journalist from different media organizations and volunteers from different communities in the state are also members of the Foundation.

It should be recalled that, the Federal College of Forestry, Jos, Plateau State has always been the centre for physical meetings and where seedlings are also donated by the Management of the College.
As preparations for this year’s tree planting project is still on, all the state chapters are busy preparing for the October project which involves GWSF plans to donate, stove in place of fire wood to users at different localities in the state.

It is of note that, one of the major objectives of Global Warming Shield Foundation is to plant One Billion Trees and replace 10 Million Kerosene stoves, 10 million Diesel Generators with Re-newables by 2030 and that, the GWSF project started in 2019 (last year).

It is gathered that, the meeting point for the tree planting is Federal College of Forestry, Jos, Plateau State, by 8.00am, on 1st October, 2020.

Other activities to mark the day, includes visit to, Aisha Mana Orphanage Home along Bidabidi Junction among other places.
The invitation is extended to all kind, and concerned Nigerians. REALITY so gathered.