Mr. Boniface Ifokwe of the Ifokwe family has finally brought hope to people, who are frequently suffering hair loss in Plateau State and Nigeria at large.

Hair loss also known as, Alopecia or baldness is a loss of hair from part of the head or body. The   cause according to experts may be attributed to genetics, hormonal changes, medical condition, medication and supplements.

Also, according to medical experts and hair beauticians, front hair loss can be quite embarrassing for women, which oftentimes makes some women hide behind wigs, weaves and other hair cover.

Findings show that, hair transplant and various hair grower creams and medications are on the shelves of big supermarkets and pharmacies, but are limited to the elite members of the society.

In an interview with Mr. Ifokwe by selected Journalists in Plateau State, Mr. Ifokwe, disclosed that in order to remedy the class difference and help those many poor Nigerians seeking help in hair loss issues, he took time and efforts to manufacture/produce, “the organic product ROSIVIM”.

Mr. Boniface Ifokwe an entrepreneur, who hails from Isuikwato Local Government Area (LGA) of Abia State, a registered member of Small and Medium Scale Manufacturers Association of Nigeria, but resides and does his business in Jos, the Plateau State capital, further disclosed that he conceived the product with his family members to address hair loss after suffering from baldness for many years, “as a way of contributing to national development”. 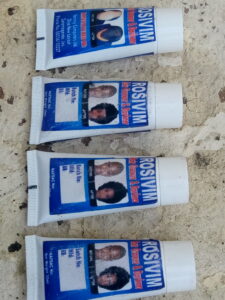 ROSIVIM, which is yet to be launched or displayed for the general public is awaiting NAFDAC analysis and registration, but has been tested on a random sample population and 90 percent has recorded improvement in their hair loss issue. A sample of the product has also been sent to a lab in America and the result was positive.

Mr. Boniface, would be seeking the assistance of the Plateau State and the Federal Government to enable the product get to a commercial level, REALITY gathered.