The Commissioner of Information in Plateau, Hon. Dan Manjang has assured the EXCO and members of the Nigeria Union of Journalists (NUJ), Plateau Council that the administration of Simon Bako Lalong would complete the remodeling project of the Council Secretariat.

Hon. Dan Manjang, who was accompanied by the Permanent Secretary of the Ministry of Information, Mr. Michael Pam, made this pledge today, the 28th of February, 2020, when he paid a courtesy visit to the State Secretariat of the NUJ..

You would recall that, work on the project has stopped for some weeks now due to lack of funds for the contractor.

According to Hon. Dan Manjang, “We want to give assurance, that for the certificates that have not been paid, we will pursue them earnestly so that they are paid because, if there are places this government would want to play games, it is not with the NUJ. We cannot play games with the NUJ! That is why, I have undertaken this tour, to come here myself to see the level of work and I am impressed.

‘You know this work is being handled by the Ministry of Housing, but I have a responsibility to come and also see what is happening, so we will put heads together with my colleague in Housing to make sure that this project comes to fruition.” 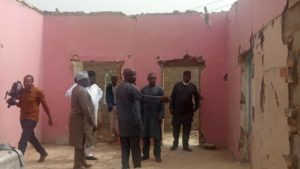 “As a matter of fact, the most important thing is that, you start the project, we can only continue from where you have reached. As for the matter of funding, you know there are different projects that are competing for funding in the state, mind you, minimum wage is also there. But as far as this project is concerned and as far as the rescue government is concerned under the leadership of His Excellency, Simon BakoLalong, this project is as good as been finished.”

When the Commissioner was reminded of the initial completion date of the re modelling project and asked if he could give a new completion date, he reacted thus, “I wouldn’t make any commitment because, I didn’t make the first commitment of 12 weeks, but I can assure you and the best I can say is that, we know that the rains are coming and the best that we can do is to make sure that this structure is roofed and as I speak to you, His Excellency, will get to know about it because, this has to do with Gentlemen of the Press and he doesn’t take matters with levity, he takes them very seriously. I am sure that the necessary directives will be given, so that the necessary releases will be made. So that at the end of the day, we will all have cause to thank God that we have this administration in place.”

To the surprise of the EXCO, the Commissioner also promised that he would appeal to Governor Simon Lalong to finish the NUJ abandoned project also within the NUJ Plateau Council Secretariat.

“Let me also say by extension, that we will appeal to His Excellency, to also include the project that is behind, not only finish the remodeling because, I have seen the project behind that was started by the NUJ. Once we are through with the remodeling, we will appeal to His Excellency to approve the project that is behind, but let us get this one done first. But I give assurances that without any waste of time, the contractor will come back to site.”

On his part, the Chairman of NUJ Plateau Council, Mr. Paul Jatau, assured that, it would not take too long for them to wrap up the job because the pace at which they were going was fantastic. “it is just that for the paucity of funds they had to stop the work, but the contractor is somebody that could be depended on to deliver on his work. If there was money, I think the 12week deadline would have been met.”