Ladodo, handed the result to Mr. Ukwachukwu Orji the Resident Electoral Commissioner (REC) Anambra state, at the collation and declaration of results, at the Headquarters of INEC in Awka the state capital.

It will be recalled that Abatete and Obosi had some hitches on the Election Day, which delayed the collation of result at the area.

CP before handing over the result said ‘This result was handed over to me by the DPO of the affected area.

“When I received the information about the disrupt of the election, I led the team of police men to the area. I witnessed the situation myself and confirmed that there was disruption.

“Some arrest were made and I want to assure the good and peace loving people of Anambra state that we are in control of the state.

“There were no deaths recorded at the general election in the state except for the injured corper whom INEC is funding for all the medical bills. 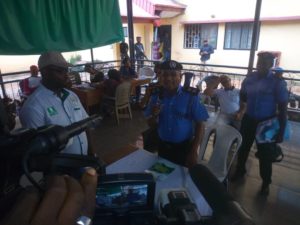 Concerning violating electoral laws, the CP urged anamberians to remain law abiding. According to him ‘I want to use this opportunity to call on Ndi-Anambra to shun election violence.

“Arrest has been made and we are ever ready to for those who will violate electoral laws.

Ladodo, however, expressed happiness concerning the fact that Anambra State, recorded less hitches compared to some other states.

Earlier on, REC Anambra state Mr. Ukwachukwu Orji while speaking before receiving the result from the CP said “The election in Obosi in Idemili LGA went successful but was disrupted at the point of collation leading to the lost of smart card readers and INEC sensitive materials.

“We had to terminate the collation process to re-access the situation.

“What we have done is to invoke a section of our regulation, which says that “where such occurrence happens, the collation officers can re-collate results from the affected areas from the duplicate copies.

“We have lost the original copies, but the duplicated copies are still there. The Nigeria police and party agents are always issues copies of duplicated results.

“We pleaded with the police, who secured their own to assist us with the result to enable us complete collation of Obosi ward.

“We want to maintain transparency and public confidence that is why we are receiving it at the presence of everybody here. The REC concluded.