The process of arriving at, who to bestow it on according to the leadership of IPA, took hectic and cumbersome efforts, as most of its set criteria to receive the Award were met by several serving and elected leaders in Plateau State, especially, within PKK.

This means that, for Rt. Hon. Yusuf Gagdi to bag the Award, his performance within the period under review must have been very outstanding.

The IPA Chairman, Mr. Shabul Mazadu, who handed the Award to the recipient, Rt. Hon. Gagdi, had in his speech said, the award of Invaluable Legislative Representation and Youth Empowerment bestowed on Rt. Hon. Yusuf Adamu Gagdi was based on the recognition of his sterling performance as a National Legislator.

Although this status is not new within PKK, the game changer was when the Chairman added that, “Rt. Hon. Yusuf Adamu Gagdi has achieved so many in the areas of law making and bettering the welfare of his constituents in the rears of Education, Health, Economic, and Youth Empowerment, among others”.

This was the game changer that IPA and its members, considered invaluable in the service to humanity.

While speaking on some other achievements of Gagdi, the Chairman of IPA said, “Of the bills he raised and were enacted into law include; Police Reform Bill, Conversion of Federal College of Education Pankshin to Federal University of Education, among others”. 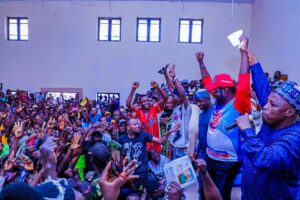 The Award became more impactful as it reveals that, there are some bills of Rt. Hon. Yusuf Gagdi undergoing administrative processing at the National Assembly and the need to continue with a winning team.

According to Shabul’s address during the Award presentation ceremony, “Some of the bills undergoing reading include, Creation of Federal College of Education Kanam. While that, which is aimed at creating Federal Technical School Amper, among others are being considered.

The need to have a system of continuity come 2023 that would provide job security in PKK was also a key revelation of the Award.

IPA believes that continuity with, Rt. Hon. Gagdi, would be impactful.

According to Mazadu, “Gagdi has already secured employment for over two hundred youths of his Constituency with the Federal Government in various Agencies, Departments and Ministries, aside empowering hundreds with motorcycles, grinding machines and cars.

“Infrastructural wise, Gagdi has constructed some roads and ICT Centers. He is also constructing Skills Acquisition Centre, and constructing palaces for some royal fathers”.