Plateau State Ministry of Lands, Survey and Town Planning has reinvigorated its drive for revenue generation in the state, as it has began to serve demand notices on property owners to come forward, to register or pay arrears of their ground rents.

You would recall that, the Ministry of Lands, Survey and Town Planning, Plateau State, had observed that, property owners in the state are either in contravention or violation of their Certificate/Right of Occupancy of the Land use Act, Land Tenure Law of Northern Nigeria and Section 3 of the Plateau State Land Use Charge Law.

The Task Force constituted by the Ministry, led by its Commissioner, Mr. Yakubu Dati, as Chairman, visited corporate and non-corporate organizations today, 26th, October, 2021, to serve Demand Notices on them in the state capital.

The Demand Notice, requires those served to report/pay arrears, register or correct Land use Act/law violations, within 30days or get their titles withdrawn or revoked and/or face prosecution.

The first point of call, was the National Museum complex, where the Commissioner expressed surprise that, the property is been used for other purposes beyond the reason(s) it was initially granted.

Although the Curator was not on seat, Mr. Dati expressed his surprise and worries to, Mr. Anwayi Danjuma Jude, an Assistant Director, who also was served with the Demand Notice.

The Ministry also served Demand Notices on the properties housing two major political parties in the state, the Peoples Democratic Party (PDP) and the ruling All Progressives Congress (APC) in the state.

Their notices were served on Barr Binchen Jantau, the Legal Adviser of the PDP Plateau State chapter and Mr. Godwin Garba, the State Admin Director of the APC respectively.

Other properties served are the Tilley Gyado House and that which houses, T. TEE El TEE Resource. 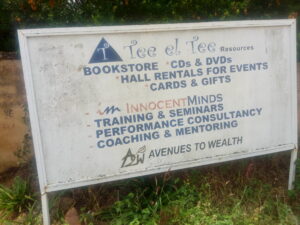 The Ministry also took its campaign concerning land and property registration to the Plateau state Central Mosque where it met with members of the JNI.

However, explaining the purpose of the tour and the issuance of Demand Notices to inquisitive Media men, who were part of the team in an on the spot interview at the Central Mosque, the Commissioner, Mr. Dati said, “The land administration has been made simple by this administration, and this campaign is to help property owners get documentation for their lands and to encourage them to have titles. 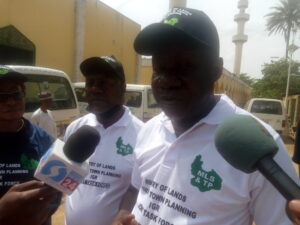 “Because a land without title is dead capital hence, this makes the campaign very important, as the registration of these landed properties would help add value to the land.

“It must be noted that, the payment of ground rent is a civic responsibility”.