The Executive Chairman gave the charge today, when the leadership of CITN, Jos District and Society, led by the State Chairman, Mr. Isaac Wadak, paid him a courtesy call in his office in respect of the Jos Annual Week.

Mr. Arlat said the country is in a time that its survival depends on professionals and that as professionals, members of CITN need to provide the way forward for better performance in the field of revenue generation.

He said though the Society of Women In Taxation (SWIT) of the Chartered Institute of Taxation of Nigeria (SWIT) Plateau state has been inaugurated, to enable women in the profession perform, they need more input and research on better ways from the members of CITN.

According to Mr. Dashe, “the Plateau State Laws have given us powers, but we need to know much about them. we also need trainings to enable us know we are Tax Collector”.

He, however, stated that, on his part in PSIRS, “We shall never relent in training our staff members”.

Earlier on his part, Mr. Isaac Wadak, who led a huge team of his EXCO on the courtesy visit, told Mr. Dashe that, they are all invited to the Maiden Edition of the Jos Annual Tax Week (AJTW) of the CITN Jos District Society.

According to the Chairman, the event is a 3-day event that would feature; an advocacy visits to Plateau State Internal Revenue Service among other organizations.

It would also involve the inauguration of Student Tax Clubs/Society in tertiary institution.

Adding that, “the event would include Workshop where two papers will be presented on Finance Act 2020 and the recent changes in State Revenue Laws, with focus on Plateau State Revenue Consolidated Law, 2020”. 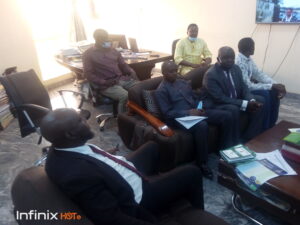 You would recall that, REALITY had reported that, the leadership of the Chartered Institute of Taxation of Nigeria (CITN), Jos District Society has been commended for its vision and initiation of the 1st Jos Annual Tax Week (AJTW) for the body in Jos Plateau State.

This commendation was give by Mrs. Martha H. Sati, the Assistant Director Tax, with the Federal Inland Revenue Service (FIRS) during a courtesy visit of CITN leadership, led by its Chairman, Mr. Isaac Wadak (FCTI) to intimate her of the activities of CITN and the Annual Week.

Mrs. Martha Sati, also commended the leadership for taking Tax awareness to schools in Plateau State and also initiated Tax Clubs in most of the tertiary institutions in the state.