A member of the Plateau State House of Assembly representing Qua’anpan South Constituency, Honorable Abubakar Nababa Mohammed AKA “Balo” on Friday, 26th of March, 2021 empowered members of his Constituency.

The event, which was part of his Constituency project, took place at Government Secondary School Kurgwi, with a large number of people from the constituency in attendance.

Addressing beneficiaries at the event, Hon. Abubakar, advised them not to sell off the items they have received as they are to serve as a constant source of income to them.

He reiterated his effort to meet up with his campaign promises, stressing that the people’s mandate gave him the seat and in return, he came down for this phase of the empowerment program as a promise kept.

“Don’t sell these items, those with sewing machine, learn how to sew clothes, tailors are now making big money today, they are not just tailors but fashion designers, they sew for us at very expensive rates in the urban areas.

“To the beneficiaries, we want to thank God the Almighty for giving us this privilege to fulfill our campaign promises. We had promised that, if elected we shall concentrate on social development intervention programs that will touch the lives of the common man in the constituency.

“It is our believe that, government cannot do everything or provide jobs for everyone, but certainly we are to show the way as the saying goes, don’t give me fish but teach me how to fish.

“That is why this empowerment program is in partnership with a Special Intervention Program of the Plateau State Microfinance Development (PLASMIDA), they are experts and will train the beneficiaries on how to use the rare opportunity”, Hon, Abubakar stated. 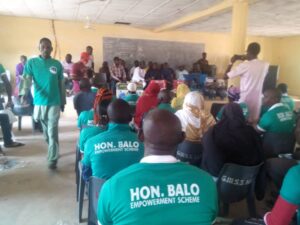 Hon. Balo expressed appreciation to the Executive Governor of Plateau State, Barr. Simon Bako Lalong and his colleagues, members of the Plateau State House Assembly for the effort put together towards the approval of his constituency project.

He thanked members of his constituency for the trust given him and that his political ambitions and aspirations are tied to his people.

“This is my third time in the House I am not better than others but my people felt it right that I represent them, so, for any future representation or position it will still be determined by my people.

“My political ambitious is to ensure that my people benefit from the system, meaning that I don’t make decisions for myself.” He stated.

One of the beneficiaries, Mr Yunusa Abdulmalik Abubakar a farmer, expressed gratitude to the Honorable saying, “I don’t have much to say about what Hon. Balo has done, I am not surprised because he is a principled man with integrity, this is just the beginning and it will not be the last, he has good intentions to assist his people as he has always done, he loves his people, so, we thank him and pray that God will guide and protect him to do more”.