Lawmakers in Anambra state have expressed concerns over the rising cases of killings in the state.

They say they are unhappy with the State Governor, Chief Willie Obiano, over this development.

The lawmakers literally fumed at plenary after the member representing Ogbaru II Constituency, Somtochukwu N. Udeze raised an alarm over the killing of four persons in Ogwu- Ikpere in Ogbaru, with their houses razed down by unknown hoodlums.

The recent attack on the densely populated oil community was a blow to Udeze, who had to call for improved security for his people.

He said there was an imminent breakdown of law and order in Ogwu-ikpere community following that breach in security and untimely death of the innocent citizens.

He narrated before the house that people of the Ogwu- Ikpere had deserted the community, taking refuge in neighboring villages in Obagwe and other communities, stressing that some community members had even run to Onitsha for safety.

It would be recalled that latest Ogwu-Ikpele killings [on February 11] was preceded by the gruesome murder of family members in Azia in Ihiala, Local Government Area.

This development in some parts of the state has, however, irked the lawmakers some of whom heaped the blame on the Obiano-led government of the state for failure to effectively react to the developments in the state.

Another lawmaker, Noble Chukwunonso Igwe, representing Ogbaru I constituency, said that the primary duty of any responsible government was the protection of life and property, adding that the state was no longer safe for the people.

He said there had been high incidence of rape and wanton destruction of properties in the entire riverine communities of Ogbaru.

Igwe said that, stories of insecurity had been on the rise in the region, alleging that security agencies were not doing enough to protect life of the people.

According to him, “On a daily basis, we hear stories on insecurity in the area; lives are being taken; property destroyed and children molested.”

From the Anambra West constituency, Hon Patrick Udoba expressed the fear that insecurity in Ogbaru would adversely affect Anambra state food security, the area (Ogbaru) being one of the food baskets of the state.

The member representing the nearby Onitsha North 1 constituency, Hon Douglas Egbuna, in his contribution, said “there is an indictment on the part of the state government,” adding that the security in Anambra state had failed.

He urged the Governor to set up a commission of enquiry to know the remote causes of the incidents that transpired in Ogbaru.

He also called on government to rise to the occasion and provide synergy between the central police and local vigilante for effective check on crime in the state.

Dunukofia constituency member, Hon. Lawrence Ezeudu, called on the state government to act positively to arrest the situation in Ogwu-ikpere which he described as one of the areas with the magic key of Anambra becoming an oil-producing state. 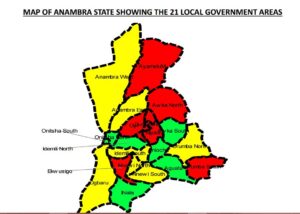 He said everything must be done in the area to check the arson and killing which he said were clearly intended to instill fear in the people there, then urging the Obiano government to act before the state is overtaken by criminals who, he said, were after the oil in the area.

Deputy Speaker, Hon Pascal Agbodike, representing Ihiala II constituency, whose constituency is coterminous with Ogbaru, feared the killings could spread beyond Ogbaru, citing a recent murder of three family members in a church in Azia, in his constituency. He called on the security agencies to rise up to their challenge and do the needful to end the growing insecurity in the state.

The speaker of the assembly, Hon Uche Okafor, described the Ogwuikpere and Azia situations as pathetic and urged the communities to sheath their swords so that God’s blessings to the state will not turn around to be a curse.

In a voice vote, the assembly members called on Governor Willie Obiano to urgently direct all relevant security agencies to intervene in the happenings at be Ogwuikpere and Azia with a view to restoring peace in the areas.

They also advised the Governor to set up enquiries into the matter.