The killing of a 7 years old Juwairiya Auwal in Jos, the Plateau capital has taken a different turn, as one Khadija Musa, has become a lead suspect.

In a shocking event today, covered by Journalists at the residence of the family of late Juwairiya Auwal, it was disclosed that, the suspect, Khadija has continued to come to the house to plead for forgiveness over the ritual murder of Juwairiya, without stating why she deserves forgiveness from the family.

According to the Mother of late Juwairiya Auwal, the lady in question is a close person, as she sometimes in the past worked for her and later, owing to financial challenges and her state of health, her two daughters, Fatima and Juwairiya, also worked for her.

From her explanation, she does not seem to be surprised that Khadija is linked to the issue.

According to her, the lady in question, who is now a prime suspect has be acting strangely towards her two daughters and has been giving them various eatable things, while instructing the daughters not to inform her.

“Items such as unexplained meat, sweets, rotten food, were part of what Khadija has been giving my children and with strong instructions not to disclose it to me”. She alleged.

However, the turning point today was the Islamic prayer rendered by an Islamic cleric in the house of late Juwairiya Auwal, which saw the suspect speaking through the elder sister Fatima. The body was Fatima’s but the voice was that of the alleged suspect, Khadija (aka Anti Gigi). 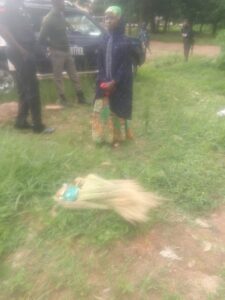 In the recorded confession by REALITY and other media operatives in the house of Juwairiya Auwal, as the prayer of the cleric was going on, the suspect’s voice allegedly claimed that she should be forgiven for her wrong deeds. That she already has plans to kill 7 of them in the compound and that she has only started her mission.

That apart from Fatima and Juwairiya, a younger boy of age between 3 and 4 years has already made the list in the compound.