With the Plateau South Senatorial Bye-election already slated for October, 2020 by the Independent National Electoral Commission (INEC), the Plateau State chapter of the All Progressives Congress (APC) secretariat has suddenly come alive with horse blame trading and huge suspicions within themselves as members.

For every political step taken in the past few days in the state and at the secretariat, dozens of interpretation are indirectly or directly attached.

With the forthcoming rerun, the impeachment of the Chairman of Qua’anpan Local Government was situated around the rerun and his intention to run, despite the huge allegations surrounding the matter and legislative indictments.

Secondly, the move by some members of the APC to draw the attention of the member representing Qua’anpan/Shendam/Mikang Federal Constituency at the green chambers of the National Assembly, HON. ALPHONSUS KOMSOL LONGGAP, to the conflicting quest for the establishment of a Federal Polytechnic in the state has also drawn suspicion among members. While, the warning that the process of recalling him may be set in place, if the issue of the Polytechnic is not resolved, was even more projected, as another political issue hanging on the Southern Senatorial election bid.

The alleged interview granted to the News Agency of Nigeria, NAN and published by an online publication, phenomenal.com.ng, by the Plateau State APC Chairman, Chief Letep Dabang, that only three Professors bought the forms for the October, 31st Plateau South Senatorial Bye-election, is even more, the stroke that is now showing on the APC image, as members, who have the opportunity to listen or read the interview have enlisted more members to their side. 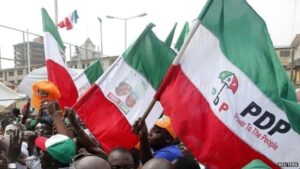 The APC from observation is already heading to the polls with two left legs, just like the People Democratic Party (PDP), that has severally unbundled itself to a State Congress that is yet to be settled nor conducted.