The Chairman of the Council, Hon. Usman, with the assistance of the Local Government Health Department, today, organized a parley for representatives of electoral Wards in the LGA and some selected Journalists to enable them further reach out and re-educate the masses in the LGA, of the true existence of the Covid-19 pandemic.

From the discussions, it is expected that the 10 representatives at the parley would be in charge of two (2) Wards each in the course of the exercise.

Delivering his opening remarks before the commencement of discussions, the Chairman, ably represented by the Supervisory Councilor on Health, Hon. Akintunde Michael, told the gathering that, the Chairman hardly goes to sleep because of his concern for the scourge and the rate at which it is spreading in the LGA.

He said, “Information is very key, in controlling this scourge at the local government level now, as there is an already observed spiral and ripple effect of the pandemic. We need team work to therefore succeed! We cannot continue to shield information. Face mask is not a new thing in our society. Many people have been wearing it in their work place for long and so, there is no need for anybody to be shy wearing it publicly.”

Hon. Akintunde, also disclosed that, the Chairman of the Local Government Council, Hon. Shehu has also flagged off free Covid-19 testing in the Council and that people should make themselves available, as the cost for the test is been taken care of by the Council.

His position was re-echoed by the Director of Health of the Local Government and other contributors, who further stressed the need for the re-commencement of the sanitation exercise in the LGA and the state at large.

However, while taking a professional approach to the discussion, the State Health Education Officer, Jerisha D. Kakwi, informed the gathering that, they are not in Jos North because the Local Government is worst hit by the pandemic, but “to flatten the curve of the infection in the local government and the state at large.” 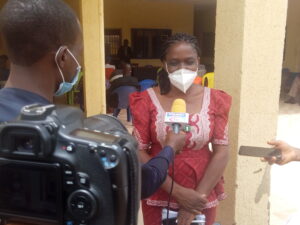 Jerisha disclosed that, Plateau State has recorded close to 2043 case of Covid-19, with Jos North already having 769 cases of the infection, while Jos South has close to 766 among other LGAs.

The participants in the parley, after various contributions agreed that, the focus should be on the enlightenment of residents that, Covid-19 actually exists because, there is a strong unbelief among its populate.