The Chairman of Plateau State Football Association, PFA, Hon. Sunday Samson Longbap has congratulated Plateau United Football Club of Jos, over their emergence, as the country’s representatives in the CAF Champions League in next season.

In a Press Release dated, 27th of July, 2020 and signed by the Secretary of the PFA, Chief Eld. Sunday AdiEtsi, the Chairman of PFA, also admonished those peddling rumours of an unfounded feud between the PFA and the Management of Plateau United, to look for other meaningful trade.

The Press Release in part reads, “The Chairman, Plateau Football Association, Hon. Sunday Samson Longbap wishes to once again on behalf of all Executive Members and football loving people of Plateau the Mecca of football, heartily congratulates our darling team Plateau United, on their emergence as CAF Representative of 2019/2020 NPFL.”

Dispelling rumours of any feud between the PFA and Plateau United, the Chairman said, “The PFA has congratulated the Champions on Radio stations and other media outfits, as the success of Plateau United is the success of Plateau Football Association and all stakeholders. We therefore advise anyone whose trade is in causing disunity and disaffection through fake news in order to gain relevance or cheap publicity to device other means and not through cheap blackmails.”

They PFA praised the efforts of Gov. Simon BakoLalong of Plateau state in sports, describing it as “Yielding positive results”, and expressed optimism that Plateau United will represent Nigeria well in the Continent. 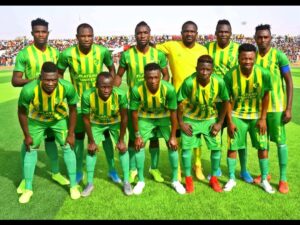 You will recall that the 2019/2020 season of the NPFL ended abruptly due the Corona virus pandemic with Plateau United topping the League table and were awarded the right to represent the country after the PPG system was adopted.