As Plateau State Government under the leadership of Governor Simon Bako Lalong, prepares to shutdown the state for the 3rd time over the need to control the spread of the deadly Coronavirus, protests from citizens in the state have hit the streets of Jos metropolis.

You would recall that the Plateau State Government has just relaxed the total shutdown order restrictions imposed on the state over the covid-19 pandemic after reviewing its phase2 implementation recently and has plans to commence its phase3 total shutdown on Monday, the 27th of April, 2020.

The protesters, who have alleged hunger to be one of the major nucleus of their protest over the stay at home order, with angry faces have trooped out in mass and into Zaria road and have blocked it.

Also, other protesters have besieged the Plateau State Police Command Headquarters to express their worries and plight to the State Commissioner of Police.

In an interview with one Fatima Idris, who resides along Zaria road, she alleged that the Local Government Chairman had told them that he was going to share money yesterday and they all troop outside, but were later told to go home and come today.

Hence, “We all came out this early morning at about 9.00am to block the road”. She claimed. 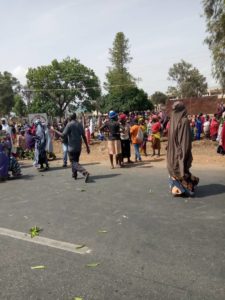 At as the time of writing this report, Security Operatives were seen sitting and watching the protester by road side

See more picture of the ongoing protests below: 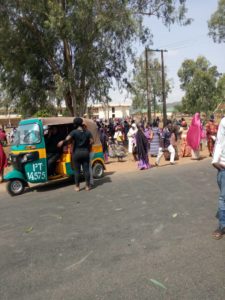 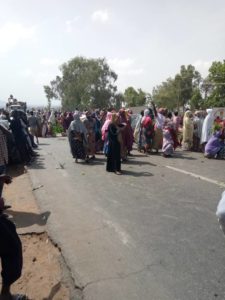