Plateau State Governor, Mr. Simon Lalong has appointed Mr. Danladi Atu, as the new Secretary to the Government of Plateau State and has also gotten the approval of the Plateau State House of Assembly to appoint 15 Special Advisers, to serve in his administration.

Atu, a Professor and Director, Institute for Peace and Social Rehabilitation, University of Abuja, replaces Mr. Richard Tokman, who was appointed in Acting capacity, following the resignation of his predecessor, Mr. Rufus Bature last year.

You would recall that, Mr. Bature, resigned to contest the 2019 Senatorial seat for Plateau North, which he lost to the opposition Peoples Democratic Party candidate, Distinguished Sen. Istifanus D. Gyang. No reason has been given for the replacement of Mr. Tokman.

According to a statement from the office of Mr. Simon Macham, Director of Press and Public Affairs, Thursday, both appointments take immediate effective. 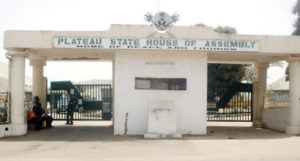 In another development, the Plateau House of Assembly has approved the request of the Governor, to appoint 15 Special Advisers, to serve in his administration.

The House, during Plenary, approved the Governor’s request through a voice vote.

The approval followed a communication from the Governor on Wednesday seeking the approval of the Assembly to appoint 15 Special Advisers.

In his communication to the House, the Governor informed the House that the request was in accordance with section 196 Sub-section 2 of the 1999 Constitution (as amended).

“In my bid and determination to form a formidable team that will help me achieve my mandate, I hereby seek the approval of the House to appoint 15 Special Advisers to serve in my government,’’ Governor Lalong had stated.