Citizens’ engagement is as old as humanity. Over 2,500 years ago, the city state of ancient Athens participated directly in civic governance. Across the world, there are diverse forms of citizens’ engagement. Citizens’ engagement is a basic principle of democracy because governments derive their authority and power from the people. Government is therefore under obligation to respond to the needs of citizens. Citizens have the right and responsibility to demand accountability and ensure that government acts in the best interest of the people. The Universal Declaration of Human Rights (UDHR) article 21 clearly states that “everyone has the right to take part in the government of his country, directly or through freely chosen representatives.

There is no doubt that citizens play a critical role in advocating and help to make public institutions more transparent, accountable and contributing innovative solutions to complex development challenges. It has been documented that engaging citizens lead to more sustainable, open and equitable governance, and in the end, this works to the benefit of all citizens, including the most marginalised. Research has shown that citizens engagement initiatives can increase transparency and citizen trust in government, enhance government legitimacy, improve outcomes of macro-economic policies and raise the frequency and quality of government responsiveness.

This framework is developed by government and citizens groups including the media as a guide to the content and principles of citizen engagement in Nigeria. Citizens engagement has been defined as “two-way interaction between citizens and government or the private sector that gives citizens a stake in decision making, with the objective of improving development outcomes.” This framework is meant to capture the diverse experiences of citizens and government in fostering citizens engagement taking into consideration the lessons learned in outlining a method for a more systematic engagement. This framework utilises a partnership approach that will develop organically with the engagement taking place at multiple levels from the community to the state, regional, sectoral, national and international levels.

Therefore, citizen participation can be seen as a process by which the government and civil society open dialogue, establish partnerships, share information and otherwise interact to design, implement and evaluate development policies, projects and programs…that require the involvement and commitment of all interested parties, including among others the poor and traditionally marginalized groups especially disadvantaged racial and ethnic minorities. Some scholars see participation as a continuum ranging from publicity to Public Partnership:

Public involvement of citizens can take various forms including publicity (to persuade and facilitate public support); public education (to provide complete and balanced information so that citizens can make informed decision); public input (to solicit ideas, opinions and feedback from citizens); public interaction (to facilitate exchange of information and ideas) and partnership (to offer citizens formalised role in shaping decisions and action).

In recent history, citizens engagement has been taking place in Nigeria. During the military rule in Nigeria (1967-1979 and 1983-1999), there was limited engagement between citizens and government. But several citizens groups emerged to advocate for return to civil rule. Since return to civil rule in 1999, there has been several efforts and platforms to promote citizens engagement. Citizens groups have emerged to engage the government on several issues including governance, health, environment, human rights, education, HIV/AIDs etc. Prominent Nigerians have set up foundations to provide services and engage government on different issues e.g. Kukah Foundation, Dangote Foundation, T. Y. Danjuma Foundation etc. Ethnic organizations and regional groups have provided platform for mobilization and engagement with government such as Ohaneze Ndi Igbo, Pan- Niger Delta Form (PANDEF), Arewa Consultative Forum, Afenifere etc. Several media organizations have created media platforms for engagement such as AIT Kakaaki, Channels TV Sunrise daily, etc.

The government of Nigeria has always recognized the need for citizens’ engagement through the creation of the Department of Public Enlightenment in the Federal Ministry of Information and Culture. In 1993, the department was merged with the National Orientation Movement and the Directorate for Social Mobilization, Self-Reliance and Economic Recovery (MAMSER) to form the National Orientation Agency (NOA). The NOA was formed to among other things communicate government policies, programmes and activities to the people; provide feedback to government on peoples’ reaction to its policies, programmes and activities; and provide a vibrant democratic culture and citizens responsibility through political and civic education.

The efforts of government and citizens to systematize platforms for engagement culminated into Nigeria signing into the Open Government Partnership in 2016.

The Open Government Partnership (OGP) was launched on 20th September 2011 to provide an international platform for domestic reformers to make their governments more open, accountable and responsive to citizens. The partnership is governed by four key principles:

Transparency:           Information on government activities and decisions is open, comprehensive, timely and freely available to the public, and meets basic open data standards.

Accountability: Rules, regulations, and mechanisms are in place that call upon government actors to justify their actions, act upon criticisms or requirements made of them and accept responsibility for failure to perform.

Technology    and      Innovation: Governments embrace the importance of new technologies in driving innovation, providing citizens with open access to technology, and increasing their capacity to use technology.

The Open Government Partnership (OGP) was launched by eight founding governments of Brazil, Indonesia, Philippines, Mexico, Norway, South Africa, United Kingdom and United States when they formally adopted the Open Government Declaration and announced their national action plans. Since the formal launching, the number of countries that have joined the partnership has grown to 75 representing more than a third of the world’s population.

For any country to join the partnership, it must meet the eligibility criteria, embrace open government declaration and develop a national action plan with concrete open government reform commitments developed with public consultation and commitment to independent reporting on progress. The minimum eligibility criteria include that the government must exhibit a demonstrated commitment to open government in four key areas, as measured by objective indicators and validated by independent experts. The four areas are fiscal transparency; access to information; income and asset disclosure and citizen engagement. In terms of fiscal transparency, there should be timely publication of essential budget documents. There should be an access to information law that guarantees the public’s right to information. In addition, there should be rules that require public disclosure of income and assets for elected and senior public officials. Finally, there should be basic protections for civil liberties and an openness to citizen engagement and participation in policymaking and governance. 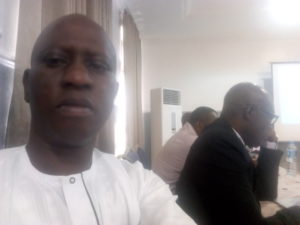 The way OGP works in practice is around five key phases:

The OGP Process was adopted by the Federal Government of Nigeria (FGN) partly because of the challenge of effectively utilising its resources to support equitable economic growth, effective service delivery and social cohesion. One of the major driving forces for the development blockade is lack of openness, transparency and accountability in governance. The logic of the OGP Process is that if government and citizens embrace open government principles in a tailored stakeholder engagement, then the blockades will be dealt with and reform will take place that will lead ultimately to effective policy, effective budget and effective implementation.

The FGN embraced the OGP to aid the implementation of its three cardinal programmes of security, economy and anti-corruption. At the conference on tackling corruption organised at the Marlborough house in the UK on 11th May 2016, the President of the Federal Republic of Nigeria, Muhammadu Buhari announced that Nigeria will be joining the OGP. On 27th July 2016, Nigeria was confirmed as a participating country by the OGP Secretariat. In October 2016, Nigeria held a retreat on OGP in Kaduna and started the process of drafting a National Action Plan (NAP). Nigeria established a 42-member National Steering Committee made up of 21 members from Government and 21 from Civil Society and the Private Sector. Nigeria NAP was approved at OGP Summit in Paris in December 2016. Implementation of Nigeria NAP started in January, 2017. At the Sub-national level, Kaduna, Kano and Anambra states are in the process of formulating their State Action Plans having joined the OGP process.

One unique feature of the OGP is the concept of co-creation. This requires civil society and government to work together as partners throughout the OGP cycle on:

creating spaces and platform for dialogue and

According to President Muhammadu Buhari, “the co-creation effort of civil society and government in developing the NAP is something I want to specifically applaud. The government considers civil society organisations as partners in our development process.”

Specifically, commitment 12 requires the development of a Permanent Dialogue Mechanism on transparency, accountability and good governance between citizens and government to facilitate a culture of openness.

The development of Permanent Dialogue Mechanism as clearly stated in the National Action Plan is meant to address the following problems:

Non-inclusiveness of citizens in the governance process.

Paucity of knowledge about governance activities by citizens

Apathy of citizens with respect to governance issues

The objectives in line with the NAP include:

To give citizens a voice in governance and make government more responsive to their priorities.

To build mutual trust and confidence between government and citizens.

The expected outcomes are:

Increased participation of citizens in governance

Increased responsiveness by government to the people’s needs

The Performance indicators include:

Proportion of MDA’s policies and plan that reflect citizens voices

In the implementation of the Permanent Dialogue Mechanism, Nigeria will adhere to the seven guidelines for public consultation as outlined in the OGP articles of governance namely:

Adequate notice: Countries are to consult the population with sufficient forewarning to ensure the accessibility of opportunities for citizens to engage.

Awareness raising: Countries are to undertake OGP awareness-raising activities to enhance public participation in the consultation.

Multiple channels: Countries are to consult through a variety of mechanisms—including online and through in-person meetings—to ensure the accessibility of opportunities for citizens to engage.

Breadth of consultation: Countries are to consult widely with the national community, including civil society and the private sector, and to seek out a diverse range of views.

Documentation and feedback: Countries are to produce a summary of the public consultation and all individual written comment submissions are to be made available online.

The Permanent Dialogue Mechanism will be organized in the spirit of co-creation around three approaches:

Nationally organized PDM: The series of activities in the national organized PDM will be by National Orientation Agency and Citizens group in the spirit of co-creation. They will be organized around four platforms:

Local Government Assembly: This is a community dialogue session between government and citizens to discuss issues that affect them. This will be held at least once every year in each of the 774 LGAs in Nigeria.

Peace and Security Platform: This is a platform to discuss issues relating to peace and security and it will be held at least once in each of the six geo-political zones of the country every year.

Town Hal Meetings: This is a platform for government to give account of its stewardship to the citizens and it will be held at least once in each of the six geo-political zones of the country.

Civil Society Roundtable: This is a platform for CSOs to examine government policies, programmes and activities as it relates to specific sectors and interest and get feedback.

Sectorally organized PDM: This will be led by MDAs and citizens groups working in those sectors including those leading on OGP NAP commitments. It will involve consultations around plans, policies and budgets of relevant MDAs/sectors including progress made in achieving results.