There was a standstill in Jos, the capital of Plateau State, as the immediate past governor of the state now Senator, representing Plateau North Senatorial District at the Upper Chambers of the National Assembly (NASS), Senator Jonah David Jang, declares his interest to join the 2019 Presidential race.

Witnessing with humility and the state at heart, Dr. Godfrey Bawa Shitgurum, who came to the venue much early to show respect for the former governor and elder statesman, Sen. Jonah Jang, walked into the venue with his admirers and supporters and took a back seat out of respect, immediately he stepped into the venue. 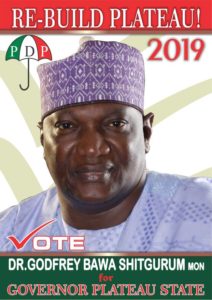 You would recall that statistics has shown that, Dr. Bawa is one of the leading contenders for the governorship seat in the state.

However, his humility paid off when he was invited to take the front seat with the Presidential Aspirant, Sen. Jang on his arrival.

Dr. Bawa is expected to formally inform the PDP EXCO, the party’s stakeholders and the people of Plateau State, tomorrow of his intention to run for the number one seat.

Partly in his declaration speech at event, which took place at the Peoples Democratic Party (PDP), Plateau State chapter’s Secretariat today, the former governor, told the mammoth crowd present, that as “The Face of the Middle-Belt”, he wants to be President, so that Nigeria would have a face in the continent and within the committee of nations.

DETAILS OF THE DECLARATION EVENT AND THE FULL SPEECH OF SEN. JANG, COMING SOON! KEEP FAITH.