The party primaries conducted by the All Progressives Congress (APC) to elect a candidate for the much awaited Local Government Councils’ election in Plateau State, has taken a new turn, as some aggrieved stakeholders of the party from Kanam Local Government Area (LGA) of the state, have accused Governor Simon Bako Lalong of Plateau State, of reducing governance in the state to that of family and friends for allegedly substituting Hon. Abdullahi Mohammed Barau with that of Hon. Abbas Wokdung, who earlier dragged the party to court without following due processes as established by the conflict resolution mechanism of the party.

The stakeholders in a press briefing at the NUJ Press Center Jos, led by one Kalamu Idris today, told the press that they are compelled to brief the press in the face of alleged wonton threats, overbearing political interference and attempt at perpetrating illegalities by the Executive Governor of the state, Rt. Hon. Simon Bako Lalong.

“We are worried by the extent of political provocation being meted out to us in Kanam LGA, especially in the face of clear disregard to the rule of law and the essence of judicial intervention. We are particularly irked by the fact that the Governor against whom our complaint relates is a legal practitioner who should readily adhere to judicial processes without any advice or prompting”. Mr. Kalamu Idris stated in his press text. 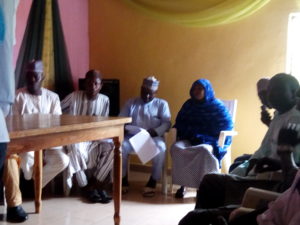 Adding that, “contrary to the convention and the zoning arrangement, hon. Abbas Adamu Wokdung, who is of the Khinbogghom area to which the position is not zoned, bragging of his personal support and connection with the governor with the aid of Hon. Dayyabu Garga, who is the Governor’s maternal cousin not only contested the said election but lost with a wide margin as a clear attestation of the resolve of the people of Kanam against him. Governance on the Plateau has been reduced to family and friends as manifested in the way and manner in which the kits and kin of the Governor meddle into primary election processes in Kanam LGA.”