BEING, A FULL TEXT OF SPEECH BY THE COALITION FOR GOOD GOVERNANCE DURING A PROTEST AT THE UNITY FOUNTAIN ABUJA, ON JULY 2, 2018, TO DEMAND ACTION ON THE CARNAGE IN PLATEAU STATE.   SECURITY SITUATION IN PLATEAU STATE DEMANDS URGENT ACTION

Our fellow good people of Nigeria,

We express our heartfelt condolence on the loss of life in our beloved state even as we pray that such disaster no longer befalls our dear nation. The kind of loss recorded in the state in matter of hours should not be the case even in a declared war situation.

It is encouraging that President Muhammadu Buhari has promised that his administration would not rest until the murderers and their sponsors are brought to justice. It is a promise we have vowed to hold Mr. President to because of the sheer wantonness and mindlessness of the killing. Fulfillment of President Buhari’s promise will ensure that bloodthirsty demons behind this evil are no longer to operate in any part of country going forward.

However, we believe that to be able to bring perpetrators of these heinous crimes to book, it is time to do away with political correctness and go after the sponsors that are already known to law enforcement agencies. To this end, we want to draw Mr President’s attention to the culpability of the former Plateau State Governor, Senator Jonah Jang in the recent outbreak of crisis in Plateau State.

Senator Jang is embittered by the many court cases for which he is afraid he will end up in prison. It must be noted that these round killings only began after his predecessor, Senator Joshua Dariye, was sent to prison in spite of being a member of the All Progressives Congress (APC). His fears were heightened by the knowledge that he is a guaranteed candidate for prison. 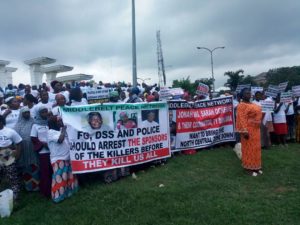 As a member of the People’s Democratic Party (PDP), Senator Jang had also vowed to make the state uncomfortable for his successor and the APC government. He further promised to stop Your Excellency from being re-elected in 2019 following which the PDP anointed him as a point man to whom much resources were assigned by some PDP chieftains in Adamawa and Rivers state to help him actualize his vow.

What we have gathered is that Senator Jang vowed to extinguish the peace of Plateau State and replace same with anguish and despair. For this satanic purpose he has earmarked the sum of one billion naira to arm youths and children for another round of violence after the recent killings in the state.

It is common knowledge on the streets of the towns in Plateau State that the former governor had used the assigned resources to procure arms and ammunitions for hired thugs in the state. The ranks of these thugs were further swollen with the importation of mercenaries to carry out the recent attacks.

These killing of innocent people is meant to undermine the credential of the current administration at the centre, which has security of life and property as a cardinal point on its agenda. The thinking is that once they can add Plateau state the other states where their bloodthirsty coven incessantly kills people they will be able to accuse President Buhari of having failed to deliver on his election promises. It must be regrettably pointed out that human life cannot and must not be devalued by making killing people part of a political game.

While we appreciate the efforts being made to ensure that there is a stop to the killings in Plateau state and the perpetrators brought to book, a good start is to immediately arrest Senator Jonah Jang to assist law enforcement agencies with information on his role in the wanton waste of human life that was recorded in Plateau state. He would be useful in identifying other people that are stoking the fire of destruction.

Those arrested in connection with the killings musty be made to name those for whom they run errands. It is imperative that Mr. President gives a marching order for security agencies to search upwards in the hierarchy of the killing machine in Plateau state so that the individual at the apex of the chain of command can be apprehended. We have no doubts that Senator Jang would be found at this highest level where Plateau state is concerned. It would then be left to be established how the national network of those creating a sense of instability operate.

It is our fervent hope that President Buhari will give direction along the line that will ensure that Nigerians can live without the fear that some politicians would unexpectedly cut their lives short.

However, we have resolved not to leave things to chances or rely solely on the discretion and resoluteness of President Buhari and the Nigerian state. Consequently, we are petitioning the International Criminal Court (ICC), citing the evidence at our disposal, to immediately arrest and try Senator Jona Jang for instigating crimes against humanity because of the role he played in the Plateau massacre.

We appeal to the people of Plateau state to be prepared to offer their testimony at the ICC because it is the guaranteed way of ensuring that those that flooded their lands with the blood of their relations are punished accordingly.